For some time lichenologists have known of two species of lichen that are made of the same algae and the same fungi partners, but appear very different. One has vulpinic acid, which makes the lichen bright yellow, the other is dark brown. Recently scientists began looking for more than one algae species in these lichens and found a  mystery resident ; a basidiomycete yeast that lives in one species but not the other. Sorting through all the possible partners in a lichen seems daunting, but these scientists are up to the task. They hope to be able to induce lichen to form in vitro, so they can study up on some of their questions without collecting lichen from the wild. Did you know that lichen will not create themselves in an artificial environment? They know the difference.

Take a tour of  beautiful lichen pictures  while pondering whether those two lichens, one bright yellow and one brown, are really two separate species, and whether there could be more residents in any of those colorful Tiny Ones than we think, and whether they could be up to other behaviors and actions that we have no idea about yet.

It’s hard to believe that a living being that holds so still can be doing so much! Sequestering nitrogen from the air, absorbing poisons from our air pollution, making nutrients available to the trees they are attached to, making soil out of rocks, providing medicine for birds and animals in the form of antibiotics that the lichens make, insulating nests and dens, and much more. Lichen continue to quietly go about their work in the world, so slow down on your next walk in the woods, and look for the Tiny Ones on tree trunks and rocks. Put your ear down close to the ground or the bark and listen. Take a hand lens, and look closely. What’s going on?

Let me know what you find! 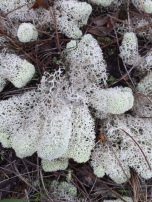 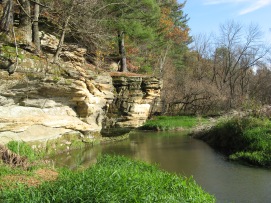