We may be hearing a lot more in the future about mycorrhizal fungus.  This site is an ongoing story about lichen, and officially, mycorrhizal fungi are not really ‘cousins’ of lichens. But cousins are often the most numerous relatives we have, so I use that term to foster awareness that the fungus Kingdom is varied and vast. Sometimes getting to know one member of a family entails getting to know other members of the family one had not planned on meeting, or even knew existed. At the party called Daily Life on Earth, meeting all the relatives is part of the fun.

I met a mycorrhizal fungus last fall, on a dead tree trunk at the end of the Wintergreen Trail. I believe it is hyphae but do not know the fungus species. If anyone reading this knows, please post your ideas! Even deceased, it was an impressive presence. Long dark threads hung from the leaning tree trunk where the dry bark had separated from the inner wood. The threads formed a complex web several feet long, dangling in the air. The strands were so strong I could not break them by hand. There was yards and yards of this fibrous material. It seemed to have covered most of the surface of the tree trunk, under the bark. 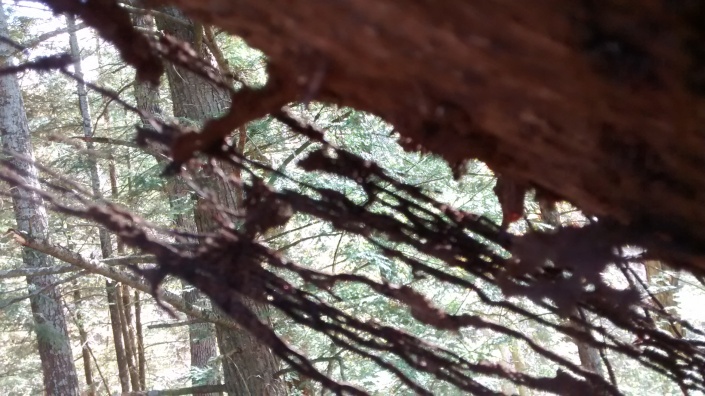 Fiber strings from under tree bark

The picture is blurry, but the very dark strings and dark bark had no noticeable detail, so the picture is close to what I saw. The extent of the fiber mass was impressive.

Why am I talking about this mat of dark threads? Because I was exploring the NASA Global Climate Change site and found a story on mapping the  mycorrhizae locations in forests, by mycorrhizae species. Read the story for why NASA is doing this; it’s interesting. There are two mycorrhizal species and trees use one or the other. The forests are regulated by the signals the mycorrhizae send through the trees. They work with other plants too. Scientists think this is important enough to make maps of where each species is in the forest, in relation to the tree species, and they are doing so by satellite images. So that old adage “you can’t see the forest for the trees” is true for us in a much deeper way than we ever understood before. The trees are one part of a vast and complex web of living beings, all talking to each other and cooperating to regulate themselves and their environment. Once we lift the curtain of our preconceptions, amazing things start to show up everywhere. If we only see trees,  birds and some flowers, we are missing the major part of the forest. There is far more diversity and number of living beings in and under the soil than above it, and as much metabolic function occurs on and in the ground as above. The Small Ones may be at least as interesting as the large plants and animals we easily recognize.

After reading the article and thinking again about the mycorrhizae, I wonder about the relationships between fungus that don’t make lichen and those that do; between the chemistry created by one group of trees and fungus, and the signals of moisture, temperature, nutrients and more that may be allowing or encouraging certain other living beings to take up residence nearby. We know so little about the extensive activity going on just underground. What similar actions may the lichen be doing? After bacteria, they are the original homesteaders, setting up the terrain to be hospitable to the first mosses and vascular plants. Lichen are very good at getting along with other life forms and have made a place for themselves everywhere on earth. Maybe they have something to tell us about their part in regulating the forest, beyond their original activity of creating soil and available nutrients from rock and wood and air.

So, no lichen pictures today, just questions about this green and shining world we share with unknown others. 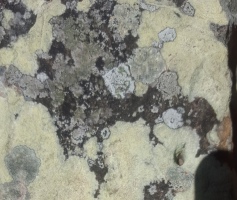 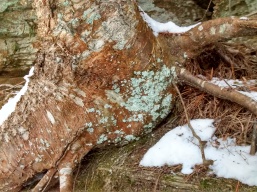